The 'Bone-diggers' return to Hoxne! 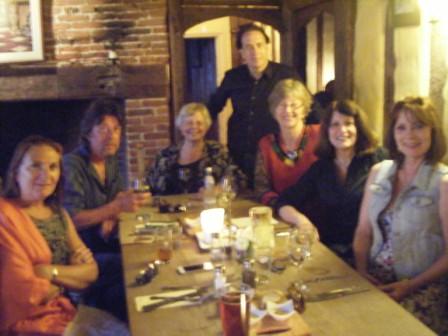 Some of the archaeologists, the 'bone-diggers', involved in the Hoxne brick pit excavations, led by John Wymer and the University of Chicago in the 1970s, returned to the Hoxne Swan for their 40 years reunion between June 10th-12th, 2014. During the three days they renewed old acquaintances with villagers who were around during the three seasons in 1972-74 when the definitive excavations took place.

Fortuitously, our monthly Hoxne Heritage Group meeting coincided with one of the days and we were delighted to have four of them join us to share their stories. These included Tessa Wymer Cooper, Anne Wymer North, John's daughter and niece respectively, Glenn Cooper and Peter Langham.

Only two of the reunion group continued with archaeology as a career - Peter Langham is a respected palaeontologist and Elizabeth Graham is Professor in Archaeology at UCL. Despite achieving a B.A.in Archaeology from Harvard, Glenn Cooper changed course and went into medicine before becoming an international author of best-selling thriller series, including 'The Library of the Dead' trilogy. He married John's daughter, Tessa after proposing to her while sitting in a ditch on the Eye Road after a car accident. Dr. Katy Spangler, Director of Education at the University of Alaska and Libby Porter from Australia joined the reunion the following day. Katy had returned to Hoxne after the dig to work as a barmaid at the Swan for a while, such was her fondness for Hoxne.

Hoxne had changed very little since the 1970s but they did notice a lot of change in the Swan. The inglenook fireplaces have since been exposed, the bar relocated and the price of beer, then Watneys, had increased from 12p a pint.

During the excavations they stayed in caravans near the site. The most productive excavations were at Cutting 23 adjacent to Parkside on the right hand side of the Eye Road, which was sited on the edge of an interglacial lake. Among the finds they remembered most clearly were the top half of a reindeer skull, the molar of a monkey and a shark's tooth. They also uncovered extensive flint working areas on the edge of an ancient river where early Hoxonians made hand axes and other flint tools to butcher the carcasses of animals . Analysis of pollen and animal bones showed that the area was inhabited by a number of exotic creatures including elephants, rhinoceros, lion and deer. The Chicago team discovered that these early humans probably existed about 320,000 years ago during a relatively temperate stage of the Wolstonian glaciation. The evidence from the Chicago excavations suggests that the site witnessed two or three periods of occupation during which groups made brief halts beside a lake or slowly moving body of water. Groupings of stones at Hoxne were interpreted as 'structures' - the earliest structures ever found in Britain - thought to have been placed there to consolidate the muddy ground at the edge of the lake.

It was a privilege to welcome these visitors from around the world to re-visit their old haunts and hear their experiences. If anyone who knew them from the 1970s missed them then it is possible that we can put you in contact.

For a detailed report of the excavations in the 1970s follow this link: →

The Hoxne Heritage Group would like to thank Dr Glenn Cooper for his donation to their funds and for the gift of the book 'The Lower Paleolithic Site at Hoxne, England' by Ronald Singer, Bruce Gladfelter and John J. Wymer, with its dedication by the late John Wymer's daughter Tessa.