This shocking story was reported in the Ipswich Journal on the 5th October 1895.

A tragedy occurred in Hoxne one Friday evening in 1895. John Churchyard, who had about an hour earlier shot his old dog, shot his wife and immediately afterwards shot himself.

John Churchyard , a tall, gaunt man, was about 50 years old, a native of Hoxne, who had lived there all his life. His wife, Elizabeth was a short, thin woman, aged about 45, from Redlingfield. Both were well known in the area. The Churchyards lived in a small house in Cross Street. They had 9 children, the oldest, a boy, about 20 years old, the youngest, a girl, about 6 years old. Due to the constant quarrelling of the father and mother the children had left home as soon as they could earn their own living so that only 4 children were living at home at the time of this tragedy.

John Churchyard could turn his hand to many jobs. He often acted as a warrener to local farmers, he was employed to destroy rats and moles and, at harvest and hay making time, he was sometimes engaged as a thatcher. When sober he was quiet and fairly well-behaved but when drunk he was morose, idle and disagreeable, so people avoided him. Mrs Churchyard was a cheerful, agreeable person, remarkably so considering she had to be constantly out doing charing work to support her family due to her husband’s idleness.

It was an unhappy household due to her husband’s idleness and his unreasonable jealousy of his wife, which appeared unfounded. Serious rows were frequent and Churchyard’s threats to kill his wife became commonplace so no one paid any attention to them. However on the evening of Saturday 21st September 1895 they both attended a harvest supper at the Grapes Inn. Churchyard declared that he had seen his wife looking as several other men and left the house in a rage. Later he was seen behaving like a madman. When Mrs Churchyard returned home a row ensued that was heard throughout the neighbourhood but it seemed to subside on the Sunday.

The following week passed normally until the Friday when Mrs Churchyard went charing at the Swan Inn. Churchyard seemed to be in a worse temper than usual that day and was heard by neighbours to threaten his wife’s life several times. About 3 or 4 o’clock he shot his faithful dog, and then appears to have gone indoors and laid down on the couch. One of his sons, Jack, aged about 17, found him there at about 4 or 5 o’clock. He told the boy that as his name was like his he would leave him the gun, the dog and the ferrets. The boy paid little attention to this and went out again. A little later the youngest child returned from school and found her father asleep on the couch. Churchyard must have made his neighbours concerned that day as when Mrs Churchyard was returning home from work, at about 5 o’clock, several of them, and her son, Jack, went to meet her and beg her not to go home, saying that her husband would kill her. She ignored them, remarking in a light-hearted way that she could only die once. She returned home and went out to the meadow at the back of the house to bring in some linen. When she entered the back door, Churchyard, whilst swearing and cursing, aimed the gun at her head and shot her dead. He then placed the muzzle of the gun in his mouth, discharged it and fell down dead. This horrible event was witnessed by the youngest child, who ran out screaming.

Mrs Barber , a neighbour, ran into the house . She described the scene in the back kitchen as resembling a slaughter house. Police constable Snell was summoned and he took charge of the house and the bodies.

Opening of the Inquest

An inquest was opened the next day, before Mr Coroner Chaston, who explained that the haste was due to the hot weather but that he would not take any formal evidence until he had acquainted himself with all the facts. He adjourned the inquiry after taking evidence from John (Jack) Churchyard Junior regarding the previous days’ events and hearing from Mr J. Dudley Phillips, the medical practitioner of Hoxne.

“ I was called to the case at 6.45 and arrived at the house at 7 o’clock. I found Elizabeth Churchyard lying with her head near the bottom step of the staircase, dead, from a gunshot wound through the left jaw. The middle finger and thumb of the left hand were shot off. There was no wound of exit, a considerable loss of blood, and from the appearance of the wound the shot must have been fired from a short distance. John Churchyard was lying with his head on his wife’s leg. He was dead from a gun-shot wound in the roof of his mouth, direction upwards and to the left parietal bone, which was fractured. There was no wound of exit, but a great loss of blood and from the appearance of the body, the wound, I should judge, was produced by a shot from the muzzle of a gun placed in the mouth. The left eye was much protruded and injured.”

The Court reassembled at the Grapes Inn on Wednesday.

John Churchyard junior was re-called and repeated his statement,adding that after the harvest supper he had returned home to find his mother was sitting on a chair in the kitchen. He went straight to bed and almost immediately heard his father return. He heard his father swear at his mother and tell her to leave. He then heard a noise as if his father had taken hold of his mother and swung her against the door. John Junior went down to the kitchen to see what was happening. His father was the worse for drink. His mother left the house and did not return that night.

James Churchyard, aged 20, said that he was the son of John Churchyard and that he lodged directly opposite his parents. He said that he had heard a gun shot just after his mother went indoors. He had ran to the door of his lodgings and saw his sister Elizabeth run out of the house crying “Father has just shot mother”. He then heard his father say “Yes, I have done for her, and now I will do for myself”. Almost immediately he heard the second shot and ran into the house as quickly as possible. He saw his parents lying on the floor, they died almost instantly.

Florence Churchyard, aged 19,a daughter of the victims said she had been acting as a nurse for an old lady, having left home a fortnight before the tragedy. About a month before she had heard her father threaten to shoot her mother, pointing at the double-barrelled shot gun on the wall, saying “Look there, Florrie, there is one for your mother and one for me”. She said thst he never threatened her mother when he was sober and that she was not aware that he was jealous of her mother. She said he has no cause to be.

Walter Aldred, shoemaker in Hoxne, said that John Churchyard had gone into his shop about half past three on Friday afternoon, and said “I have shot old Howler, come and look”. He went with Chuchyard to see the dead dog. Churchyard, he said, was the worse for drink. Walter returned home and at about 5.15 heard a gunshot coming from the house opposite. On reaching his gate he heard a second shot. Just prior to this he heard Churchyard say “I have done for her, now I will do for myself”. Walter ran into the house to find them both lying in a pool of blood, gasping. They died almost immediately. He then sent for Police Constable Snell. When asked about Churchyard’s character, he stated that, when sober, the deceased was a sensible well-behaved man and could not be a better neighbour, but that when drunk he was terrible. He did not often go without drink when he had the money to get it.

Verdict of the Jury

The Coroner, in summing up, explained the law bearing on such cases to the Jury, who returned a verdict of “Wilful Murder” against John Churchyard for shooting his wife, and one of “felo-de-se” in Churchyard’s case.

Note:Felo de se, Latin for "felon of himself", is an archaic legal term meaning suicide. In early English common law, an adult who committed suicide was literally a felon, and the crime was punishable by forfeiture of property to the king.

Funeral of the victims

They were both buried, on the afternoon of Monday 30th September, in the parish churchyard. The ceremony was witnessed by a large number of spectators. There was a great contrast between the burial of husband and wife. John Churchyard was brought to the grave first, in the parish hearse, followed by his eight children. He was immediately lowered into the grave without any ceremony or in the presence of a clergyman. Elizabeth Churchyard was conveyed in the same hearse, followed by her children, relatives and friends, the coffin being covered in wreaths. The funeral party was met at the Church gate by the vicar, the Rev. Cecil Downton, the first part of the service was conducted in the church and the remainder at the graveside. 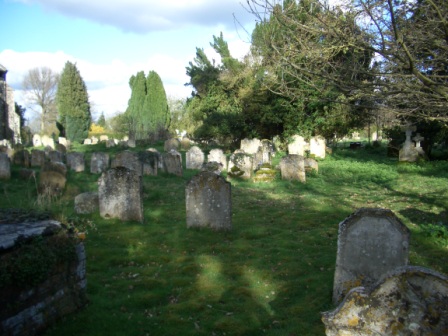