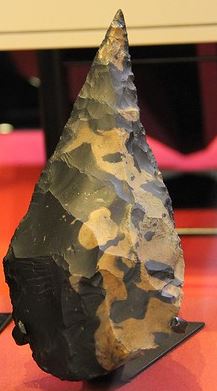 In 1797 John Frere sent a letter to Rev. John Brand, Secretary of the Society of Antiquaries describing his observations of flints, now known as palaeolithic hand-axes, being found in a hole dug by brickworkers in Hoxne. The only reaction to this letter from the Society was that he was thanked for his 'curious and most interesting communication'. His letter was subsequently published in Archaeologia (Vol. 13, 204-5) in 1800.

His letter was as follows:

I take the liberty to request you to lay before the Society some flints found in the parish of Hoxne, in the county of Suffolk, which, if not particularly objects of curiosity in themselves, must, I think, be considered in that light, from the situation in which they were found.

They are, I think, evidently weapons of war, fabricated and used by a people who had not the use of metals. They lay in great numbers at the depth of about twelve feet, in a stratified soil, which was dug into for the purpose of raising clay for bricks.

The strata are as follows:
In the same stratum are frequently found small fragments of wood, very perfect when first dug up, but which soon decompose on being exposed to the air; and in the stratum of sand, (No. 3,) were found some extraordinary bones, particularly a jaw-bone of enormous size, of some unknown animal, with the teeth remaining in it. I was very eager to obtain a sight of this; and finding it had been carried to a neighbouring gentleman, I inquired of him, but learned that he had presented it, together with a huge thigh-bone, found in the same place, to Sir Ashton Lever, and it therefore is probably now in Parkinson's Museum.

The situation in which these weapons were found may tempt us to refer them to a very remote period indeed; even beyond that of the present world; but, whatever our conjectures on that head may be, it will be difficult to account for the stratum in which they lie being covered with another stratum, which, on that supposition, may be conjectured to have been once the bottom, or at least the shore, of the sea. The manner in which they lie would lead to the persuasion that it was a place of their manufacture and not of their accidental deposit; and the numbers of them were so great that the man who carried on the brick-work told, me that, before he was aware of their being objects of curiosity, he had emptied baskets full of them into the ruts of the adjoining road.

It may be conjectured that the different strata were formed by inundations happening at distant periods, and bringing down in succession the different materials of which they consist: to which I can only say, that the ground in question does not lie at the foot of any higher ground, but does itself overhang a tract of boggy earth, which extends under the fourth stratum; so that it should rather seem that torrents had washed away the incumbent strata and left the bog-earth bare, than that the bog earth was covered by them, especially as the strata appear to be disposed horizontally, and present their edges to the abrupt termination of the high ground.

If you think the above worthy the notice of the Society, you will please to lay it before them.

I am, Sir, with great respect,
Your faithful, humble servant,

Frere's publication was short (just two pages) but it was critical; it was the first paper to describe handaxes as 'man-made' and to note their association with ancient animal bones. These observations challenged a commonly held belief at that time, namely, that the Earth had been created in 4004 BC. Frere also gave the Society of Antiquaries five handaxes from Hoxne, and these remain in the possession of the Society to this day (although four are on long-term loan to the British Museum).

Frere died in 1807 and was buried in the family vault at Finningham on the 19th July. It wasn't until nearly 60 years later that the importance of Frere's publication was finally acknowledged. In 1859, archaeologist John Evans and geologist Joseph Prestwick visited what would become another important and long-studied Palaeolithic site, this time in northern France. Here in Abbeville, stone tools were recovered from undisturbed deposits that were 11 feet below the surface, but at the time people were unaware that anything similar existed in Britain. After returning to England, Evans found himself at the Society of Antiquaries waiting upon friends. Upon looking into the case that housed Frere's handaxes, Evans was amazed to see in it three or four implements precisely resembling those found at Abbeville.. Although unlabelled, Evans traced the handaxes to Frere and his Archaeologia paper and subsequently visited Hoxne to test Frere's theory regarding the nature and age of the deposits. That same year (1859), Prestwick submitted a paper to the Royal Society in which they concluded that Frere's observations were correct.


It can now be shown that the brickearth deposits came from a lake, about 570m across and up to 14m deep, that had formed in a hollow left by the Anglian Glaciation. This had progressively infilled with silt in a warm period around 400,000 years ago that since 1956 has been known as the 'Hoxnian Interglacial' after this place. Later excavations indicate that the flint hand-axes and other tools were deposited on the edge of the lake in a late stage of the Hoxnian Interglacial, about 370,000 years ago.

Frere's Hoxne site is considered one of the most important middle Pleistocene sites in Europe because of what he observed in his letter: juxtaposition of artefacts, animal remains and stratigraphic evidence. Its significance is double: for paleoanthropology, showing Homo presence in Britain approximately 400,000 years ago, and, for geology, dating stages of the European Great Interglacial period (known in Britain as the Hoxnian).

Frere was born at Finningham, at the ancestral home of the Frere family, the son of Sheppard Frere and Susanna Hatley. Later moving to Roydon Hall, Norfolk. In 1766, Frere received his MA from Gonville and Caius College, Cambridge and was elected to a fellowship. He subsequently held several political offices and was appointed High Sheriff of Suffolk for 1776-77. He was elected a member of parliament for Norwich from 1799 to 1802. He was also Fellow of the Royal Society and the Society of Antiquaries.

John Frere was the father of John Hookham Frere, who was a British Diplomat during the Peninsular Wars and Writer. In 1842 John Hookham Frere owned land in Hoxne including what is now known as Chickering Corner Farm and Gravel Pit Farm (now known as Depper Dip). Edward Frere, an ancestor born in 1680, purchased the Hoxne Estate of Sir Charles Vernon which stayed in the Frere family for many years.

During 1971-1974 and 1978 the last and most extensive archaeological excavations were undertaken on this site. These were directed in the field by John Wymer on behalf of Professor Ronald Singer of the Department of Anatomy, University of Chicago, in collaboration with numerous specialists.

By the latter part of the 19th century, the Hoxne brickyards had extended to both sides of the Hoxne to Eye road, the western more recent pit being known as the Oakley Park Pit, this being the place where the excavations were undertaken in the 1970s.

A far more detailed account of these excavations can be found in the Proceedings of the Suffolk Institute of Archaeology and History, their annual journal, available on-line at the Suffolk Institute's web site and the book 'The Lower Paleolithic Site at Hoxne, England' by Ronald Singer, Bruce G. Gladfelter and John J. Wymer.