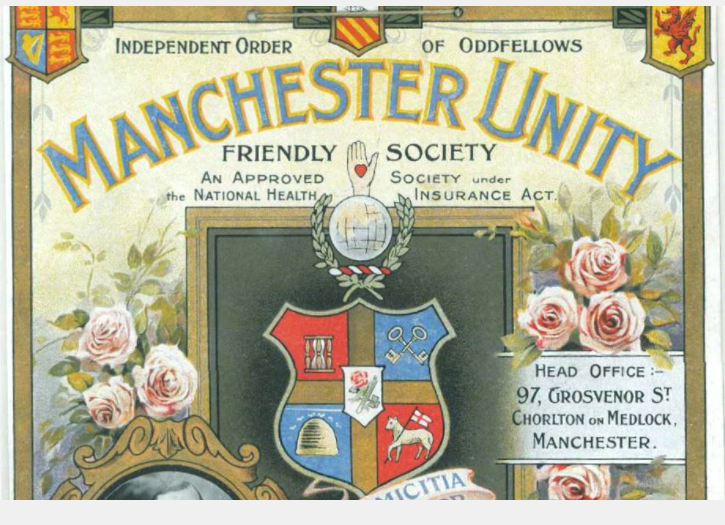 On 26th July 1844 a new Lodge of the Independent Order of Odd Fellows of the Manchester Unity was opened. The Lodge was under the patronage of Lieut. Gen. Sir Edward Kerrison, Bart., M.P., and was called the “Loyal Waveney Lodge”. They met at the Swan Inn in Hoxne.

Recently the framed certificate of dispensation for this Lodge, pictured below, was discovered in the Church vestry.

Follow this link for a transcription of the Dispensation.→

The committee members noted at the bottom included those from the headquarters in Manchester, Bury St.Edmunds and Thetford. The initials after their names stand for:-

The members of the "Loyal Waveney" Lodge celebrated their anniversaries at their headquarters, the Swan Inn, from 1846. A dinner at the Swan was preceeded by a church service.
For their jubilee, in 1894, after a church service, the dinner, provided by Mr Huggins of the Swan, was enjoyed at St. Edmunds's Hall. After which they moved on to Oakley Park, which had been put at The Lodge's and public disposal by the Hon. Lady Bateman, where there was a program of athletic sports, concerts and dancing.
In 1953 it was proposed that the Waveney Lodge was transferred to the Haven of Success Lodge in Diss.

A short history of the Oddfellows

The Grand United Order of Oddfellows was established in England in 1798. These friendly societies were set up to protect and care for their members and communities at a time when there was no Welfare State or National Health Service. The aim was and still is to provide help to members and communities when they need it. The friendly societies are non-profit mutual organisations owned by their members. All income is passed back to the members in the form of services and benefits.

At the top of their logo is their Three Links symbol. It stands for Frendship, Love and Truth, which is the motto of the Oddfellows Order. In early Society days the use of signs and symbols played an important role being essential for communication as many workers were illiterate. In 1822 their first annual conference was held in Manchester (30 May-1 June), presided over by Chairman (Grand Master) William Armitt. He presided over a further two conferences in 1823 and 1826. In 1834 a reminder of their ‘illegal’ status was served, despite prosperous growth. Six men, the ‘Tolpuddle Martyrs’, from another society were prosecuted and sent to an Australian penal colony. News reached Deputies at their Hull annual conference, resulting in many rushing home to burn ‘treasonous’ documents. Changes to ritual practices and the removal of oaths ensued.

By January 1843 there were 3,368 lodges containing 219,009 members. The lodges being divided into 296 districts. A good moral character was the only requirement for joining this society. Over the previous year at least £150,000 had been distributed amongst sick and distressed members.

In 1851 their ‘illegal’ status was overturned, as Branch Friendly Societies were declared legal. By this time they had become the largest and richest friendly society in the world, spurred by the Industrial Revolution. By joining a friendly society, workers could protect themselves and their families against illness, injury or death.

In 1893 Female Branches (Lodges) were introduced to the Society, with equal membership status to men being granted in 1898. In 1912 they became one of the government’s approved societies to administer National Insurance. In fact, their Society’s actuarial tables were the blueprint for the government’s recommendations of contribution vs payment.