These are some of the Pubs of Hoxne.

The Swan Inn is a 15th Century listed building, formerly known as Bishops Lodge. Built in 1480 by the Bishop of Norwich, The Swan's interior reflects Hoxne's ecclesiastical past, with ornate ceiling beams and wide-planked floors.

The existence of a C16 side passage suggests that the building was already an inn. The parlour has moulded cross-beams and a dragon beam, evidence that the front and gable end of this section were once jettied. The Ceiling of parlour chamber has 2 chamfered bridging beams intersecting with moulded axial beams; moulded joists, possibly re-used. A First floor room in former stair wing has a stuccoed fireplace over which is an early C18 plaster cartouche, the central oval tablet shows a Resurrection scene and above is a coat of arms which contained the sacred monogram IHS. This room is likely to have been a private chapel for a Roman Catholic family.

The following is an architectural appraisal of The Swan carried out by the Suffolk Historic Buildings Group in 1996.

The Swan is a fine early timber-framed building which has been studied in some detail by Stephen Heywood and Robert Smith.

Because of the way the upper floor was divided into three separate units, each with its own stair, an original use as a high class guests lodging house has been postulated. It was an Inn by 1619, a plan of that date also showing a carriage entrance which has since disappeared. The brick front was added in the 18th century and at the rear there have been various later additions.

The two principle ground floor rooms have good moulded ceilings. The diagonal dragon beam in the parlour ceiling shows that the front and south end walls were once jettied.

The narrow two-storied wing behind the main chimney stack is original. Its function is unclear but it may have been a porch. The first floor room in it was heated by a fireplace in the flank of the main stack.

The two-storied porch to the south is a slightly later addition of high quality, possibly an upgrading of the original porch. Note the jettied first floor and end gable, and yet another overhang at collar level! Also the open-sided arrangement on the ground floor.

Oriel and clerestorey windows lit the fine first floor chamber with a moulded cambered ceiling, like a church porch.

The two-storey outshut behind the parlour seems to have contained an original stair as well as a small end room on each floor, the upper of these lit by a window with three arch-headed lights.

With thanks to Stephen Heywood and Robert Smith of the Suffolk Historic Buildings Group. 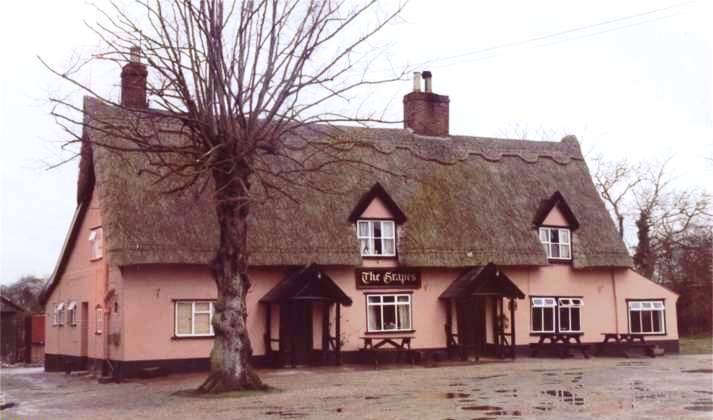 The Grapes is a listed building in Cross Street, formerly known as the Grapes Inn. It is timber framed with a thatched roof. It is a former open hall house of c.15th century, the upper end rebuilt and enlarged c.1700. The original roof is intact and is considerably smoke-blackened. A floor was inserted in the hall in the late 16th century.


In March 1996, Pubmaster Ltd, the owner of The Grapes, was given permission to convert the pub to a private residence. From 1991 to 1995 there had been 5 different tenants and, as the owners had failed to find a new tenant, it had been closed in October 1995 and boarded up. Trade had fallen to such a low level despite a number of efforts to make it a success.

Below are some old newspaper reports regarding The Grapes.

The Ipswich sessions, reported in the Bury & Norwich Post on 23rd April 1828, stated that Robert Hunton had, under false pretences, obtained 7 quarts of beer from Mr Noah Read at the Grapes public-house at Hoxne. He received a sentence of one month's hard labour.

Reported in the Ipswich Journal of 13th July 1850, Josiah Harvey, aged 22, (incorrectly reported as Jonah) was convicted of stealing half-a-crown and other monies, the property of John Pipe, landlord of the Grapes public-house, Hoxne. As the prisoner had a previous conviction he was sentenced to be transported for ten years. A Josiah Harvey, who was convicted at the Ipswich Quarter Sessions on 5th July 1850 and sentenced to 10 years, was transported to Western Australia on the vessel 'Marion' on the 30th October 1851. The ship carried 280 male convicts according to the Australian Convict Transportation Registers.

There was an advert in the Ipswich Journal on the 18th March 1876 for the sale of The Grapes. This was part of the sale of the Lower Brewery in Diss and its associated public houses. The Grapes was described as a substantial full-licensed Inn , with ranges of Buildings, Front Garden and Orchard and 2a. 3r. 21p. of Arable and Pasture LAND, in the occupation of Mrs Honor Frost.

The club room at the Grapes was capable of holding about 100 people. Political meetings were held there in 1884.


The Red Lion Inn was timber framed with a thatched roof and was located in Cross Street. It was badly damaged by fire in 1964 and subsequently demolished.

Alec Jolly took over The Red Lion on 11th October 1958 and left 9th May 1964 when it burnt down. The pub was owned by the Steward and Patersons brewery rented, by Alec Jolly, for £26 per year, which also included 10 acres of land. Alec installed a Juke box shortly after taking over which brought in trade from further afield. There were 100-200 regular customers. Mostly bottled beer was sold(1pt was 10d) Draught cider was the same price bought in at 5d sold for 10d then put up to 1 shilling. Games, played in the pub, were shove halfpenny and darts.

The Red Lion caught fire on Saturday afternoon, 9th May 1964. The licensee's wife, Mrs Ivy Jolly, was the first to see that the wooden barn next door was alight. The strong westerly wind fanned the blaze onto the thatched roof of the Red Lion. It took the firemen nearly 20 hours to put out the flames and pull down the wrecked thatched roof. Two fireman narrowly escaped injury as one of the three chimneys suddenly collapsed.

Many local villagers turned out to save most of the furniture, beer and spirits despite the heat, smoke and the water from the firemen's hoses. Soon after the firemen had left, the customers turned up in scores bringing out the salvaged bottles and a juke box from the bar, setting up an open-air bar.

Someone had chalked the words "Business as usual" on the green baize top of a card table and put it on a heap of burnt thatch.


Alec Jolly, the licensee, tried to negotiate for a marquee and hoped to be able to carry on until the brewers, Steward & Patterson Ltd., decided the Red Lions future.
Sadly the pub was considered to be in too bad a condition and was subsequently demolished.

With thanks to the Potter family for the pictures.

The Royal Oak is a timber framed building with a thatched roof. It is now a private residence called 'The Retreat'. It is in Chickering Road, Heckfield Green.

The Ipswich Journal of 2nd May 1789 reports the Swan Inn was burnt down.

"Thursday se'nnight a dinner was given to all the poor in the town of Hoxne, by the principle inhabitants there,on account of his Majesty's recovery; after which some guns were fired, when the wadding (as it is supposed) lodging upon the thatch of the Swan Inn, it unfortunately caught fire, and the house was soon reduced to ashes, notwithstanding every effort of the inhabitants to extinguish the flames. One man had his arm broke, and six others were terribly bruised, by the breaking of a ladder, whereon they were ascending to get on the top of the house."

However this seems to be incorrect as the Swan Inn is still standing!

The following advert was printed in the Ipswich Journal of 13th June 1789.

To Be Sold by Auction

"On Wednesday, the 24th day of June instant, between Three and Five o'clock in the afternoon, at the Swan Inn, in the county of Hoxne.

The remaining Part of all that Messuage, being a Public House, called the Falcon, in Hoxne aforesaid, part whereof hath been lately destroyed by fire, and a six stalled stable entire, in good repair, together with the seite of the said house, and the yards and hemplands belonging thereto, containing about an acre, situate in the street of Hoxne aforesaid, all freehold.

Further particulars may be had by applying to Messrs. Browne and Taylor of Diss, Norfolk."

It seems that the original reporter confused the two pubs. The Falcon appears to have been a thatched building in the Street in Hoxne with stabling, yards and about an acre of land, unfortunately we do not know where it stood.

"Upwards of 400 poor people dined in the Low Street at Hoxne by a voluntary subscription of £ s.d. in commemmoration of the Kings happy recovery from a fit of insanity.... The day concluded with melancholly circumstance of the burning of the Falcon publick House. (never any more suffer the firing of guns on rejoicing days)"

In September 1787 the Petty Sessions for the Hoxne Hundred for the hiring and retaining of servants was held at the Falcon.(The Ipswich Journal 22nd September 1787)