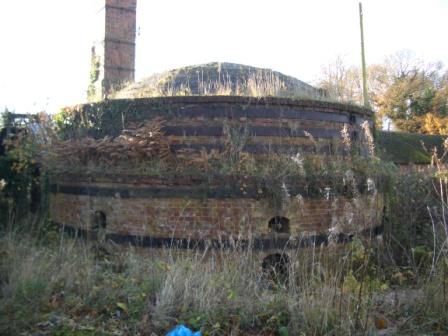 The brick and tile works in Hoxne were operated by Charles Robinson between 1883 and 1888, followed by the Hoxne Brickworks Company and finally Banham and Son between 1925 and 1937, with pipe manufacturing continuing until 1965. However, brick manufacture on this site possibly dates back to a much earlier date (13th/14th century) and John Frere records brickworks at this site in 1797.
For details of John Frere and his discoveries click here

Historic Ordnance survey maps of 1886 and 1927 indicate that the kiln was originally located within a range of buildings, aligned north-south, to the east of the drying shed. A later 20th century store building partly lies over the site of this range, and a stub of extant brick wall adjacent to the store is most likely a remnant of this earlier structure. The form of the earlier kiln was rectangular in plan.

The OS maps show the drying shed and, to the south-east, two other buildings, now demolished, with brick extraction pits further to the south. The machine shed to the west is not depicted suggesting that it was erected post-1927. A second, larger, late 20th century storage building has been erected to the east of the drying shed.

The small circukar kiln on the site may be contemporary with Banham's tenure of the site, but was rebuilt for pipe making in the late 1950's or early 1960's. The drying shed, damaged by fire in the 1960's, has been partially reconstructed and extended to the east. The machine shed to the west has been highly modified in the late 20th century, but contained a brick maker and clay extruder (made in the Sheffield Brightside foundry) for drainage pipe making, powered by a Fielding and Platt diesel engine of circa 1929, in use until brick and pipe making ceased on the site. Since the 1960's the site has had a variety of uses including a concrete crushing plant and storage.

There are three buildings on the site which pertain to brick and drainage pipe manufacture:

The Kiln and Chimney

Constructed of red brick, the kiln has a circular plan of circa 4m diameter with a domed roof and is bound by five visible iron straps with a door to the south-east. It is a single chamber, intermittent kiln, operating on a down-draught firing system. At the base are eight pairs of fire-holes with arched heads, which provided the heat necessary to fire the bricks and pipes loaded into the domed chamber.

The draught from the central hole in the roof dispersed the fumes channelled through subterranean flues to the chimney.

The latter is located to the south, but not connected to the kiln above ground. It is built of red brick with cresting and has a square plan. Like the kiln it is supported by strap-work.

The kiln is intact and has now pamment flooring and a domed roof of four brick-courses thick with a central draught hole over the chamber. Historically, the kiln had a honeycomb brick floor to allow the heat to circulate.

Enclosed between the north elevation and a central brick spine wall (effectively forming a tunnel) is a trackway running the lenght of the shed. Progressively warmer near to the kiln, the tunnel was used for slowly moving trolleys loaded with bricks and pipes in their moulds towards the kiln, drying them before firing. 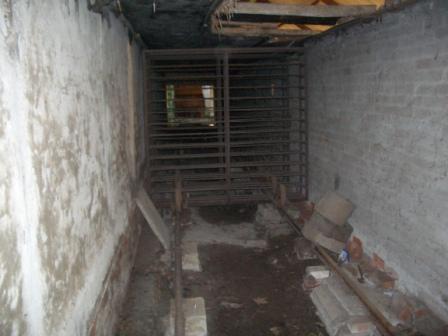 Approximately 'L' shaped, the machine shed is in a poor condition. Partially constructed in brick, and partly timber-framed, the shed has corrugated metal coverings to some elevations and the roof. The latter is entirely later 20th century in date, and is supported by steel joists and columns. There are three distinct elements to the shed. The east-west range has a lower section to the east adjoining to a double-height section to the west. A smaller brick wing to the south housed the diesel engine. Line shafting to the north of the building presumably was once housed in an outshot which is no longer extant.

The Field and Platt diesel engine was located in the brick-built wing and had a 7.5ft flywheel attached. Through an array of belts and pulleys, the engine powered the drive-shafts of the brick-maker and clay extruder housed in the east-west range. The machinery dates from the 1920's or later. Both the engine and the extrusion equipment are undergoing restoration and will be housed at the Dougie McMahon Collection of Local Industrial Equipment.

The remains of the small round mixing pit are located to the immediate north of the Machine Shed.